Widely known as an early martyr, Sebastian was a Roman soldier arrested during the Diocletian persecution of the late 3rd Century. Ordered to be executed, he was tied naked to a column and shot with arrows. Widely represented in art, it was not this, however, that killed him. He was left for dead, but was nursed back to life. After recovering, he intercepted the Emperor and denounced him for his cruelty to Christians. Enraged, the Emperor once again ordered his execution. This time, he was beaten to death, on 20th January 288. How many others have achieved martyrdom twice in one lifetime? 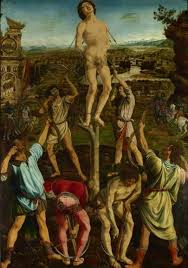 Well known from the representation in art as a near naked man pierced by arrows, it is hardly surprising that he was accepted early on as a gay icon. “He was a featured subject of a host of Renaissance and baroque artists (including Tintoretto, Mantegna, Titian, Guido Reni, Giorgione, Botticelli, and “Il Sodoma”) whose works inspired an explicitly homosexual cult of Saint Sebastian in the nineteenth century.” (More at glbtq/arts ). In modern times, the well-known image has been reworked and reinvented by a host of prominent and lesser known artists, including Derek Jarman on film), and Damien Hirst, as well as cover pictures for Esquire and reFresh magazines.

Far better known from the widespread artistic representations than Sergius & Bacchus, he is regarded by many as the patron saint of gays. This derives, though, only from the image, not from anything that is known about his sexuality as such (although  he was young, male, unmarried and in the army. Make of that what you will) 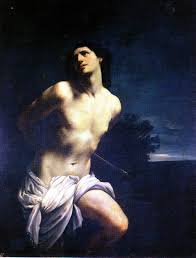