Lessons From a Four-year Old (He is what he is).

“I am what I am” has so long been a queer slogan that it has almost become a cliche, lost its meaning.  But when we really think about it, the words still have power to move – certainly for me and Raymond – probably also for others of our generation.  But I wonder:  how long did it take us before we could embrace the words for ourselves – and how fully?  I doubt if there has ever been a child this  young, with parents wise and supportive enough to enable him to be who he is.

Sam is a 4-year-old boy who likes dressing up.  So do most young kids, both boys and girls. He has a special dressing up box: again, pretty common.

Sam likes pink clothes.  So do a lot of girls – boys, not so much.       But his folks are willing to go along with this, because it’ s what he likes – as long as it’s not too outlandish.

Sam likes a lot of frills, and gauze, and tulle. So do a lot of girls – boys, not so much.       But his folks are willing to go along with this too, because it’ s what he likes – as long as it’s for the dressing up-box, in domestic privacy. 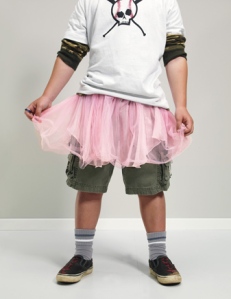 This is where the story becomes edgy, challenging for the parents, and ultimately uplifting for its plain common sense – and uncommon courage.

The day came when Sam decided he wanted to wear a dress – to school.  Mother was sympathetic. Her own wardrobe does not conform to the female stereotype of dresses, nor as a child did she stick to girl clothes.  But, let’s face it, a girl in dungarees is not going to take the same flack as a boy in a dress. Mother wanted her son to feel free to be himself, but was equally conscious of the real problems that this would bring him, with teasing and quite likely real bullying.     She wanted to encourage him to reject the dress and stick to a safer option, but knew she could not find a convincing  rationale beyond the line of “boys don’t wear dresses” – which she was not prepared to use.  So what’s to do? She went for plain, simple honesty.

She explained very carefully to Sam that he would be teased, possibly bullied. He was not dissuaded.

Sam’s declaration that he would wear the dress to school saved us, in a way, from having to make a decision. He had already made up his mind. I warned Sam carefully that if he wore it, he would probably get teased. He was undeterred, adamant about wearing the dress; clearly, avoiding teasing was a lower priority for Sam than simply being himself. I could see that standing up for his choices in a relatively safe and supportive environment was a useful life lesson. And it occurred to me that having confidence—being proud of who he is, even if he’s different from other kids—is the best defense against the inevitable ridicule.

Then it gets inspiring:  if Sam was willing to face the taunting, he had to be ready for it. so Sam’s folks gave him some coaching in how to deal with the hassles he would be picking up.  How did it go?  Like Eliza Doolittle at the ball, it was a triumph.

At that morning’s drop-off, my confidence in Sam moved up a notch when he announced to his teacher, “Look at my pretty dress! No one is allowed to make fun of me.”

After school, Sam beamed as he reported that his teachers had said they liked his dress, and the other 4-year-olds had said he looked pretty.

There were some bigots – the five-year -olds tried to tell him that boys don’t wear dresses.  How’s this for a plain, common-sense response?

Out of the mouths of babes.  Read the full story at “The Pink Dress”

(Hat Tip to Peter Toscano, where I first read of this)

There is an important lesson here for those of us who are gay in the church.

2 Responses to “Lessons From a Four-year Old (He is what he is).”