“Since Jesus had table fellowship with social outcasts and sinners, those rejected by the religious establishment of his time, I consider myself to have been most fully a Jesuit, a ‘companion of Jesus,’ when I came out publicly as a gay man, one of the social rejects of my time. It was only by our coming out that society’s negative stereotypes would be overcome and we would gain social acceptance.”

There is no contradiction between being Catholic and gay or lesbian. Indeed, just as Robert Carter says he was most fully a Jesuit when he cane out publicly, so for many of us, we are most fully Catholic when we too come out in Church.  (I say deliberately “for many of us”, as coming out is always a deeply personal decision, which may not always be feasible for all.)

The Rev. Robert Carter, who in the early 1970s was one of the first Roman Catholic priests in the country to declare publicly that he was gay and who helped found the National Gay and Lesbian Task Force, died on Feb. 22 in the Bronx. He was 82. 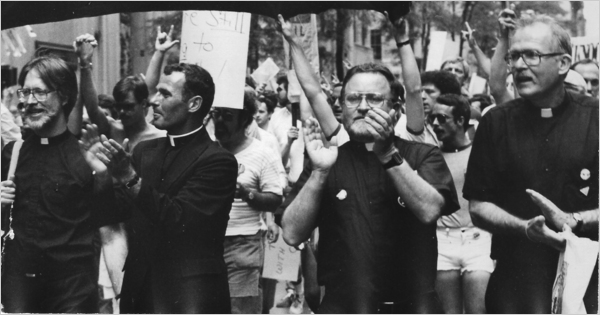 His death, at a Jesuit health care facility, was confirmed by the Rev. Thomas R. Slon, executive assistant to the provincial of the New York Province of the Society of Jesus.

Father Carter’s coming out was a very public one. In October 1973, Dr. Howard J. Brown, a former New York City health services administrator, announced that he was gay and that he was forming a civil rights organization for homosexual men and women. Then called the National Gay Task Force, it later became the National Gay and Lesbian Task Force.

An article about the group in The New York Times said: “A number of homosexual and lesbian organizations were represented on the board. One member was the Rev. Robert Carter, a Jesuit priest and professor of historical theology.”

Soon afterward he was visited by a subprovincial of the Jesuit order. “It seems that they were afraid I had had a psychotic break or something,” Father Carter wrote in an unpublished memoir.

Although there were calls for his expulsion by irate “Jesuits, parents and alumni of our schools,” Father Carter continued, he was not disciplined. In those days, the church and the Jesuit order were somewhat more accepting of gay people.

The church continues to hold that while homosexual attraction is “disordered,” gay people who are celibate are not inherently sinful. In 2005, however, the Vatican issued a document saying the church would not admit to a seminary or ordain “those who practice homosexuality, present deep-seated homosexual tendencies or support the so-called ‘gay culture.’ ”

Father Carter helped found the New York chapter of DignityUSA, a support group for gay Catholics. In 1972, with the Rev. John McNeill, he hosted the first meeting of the chapter at the Jesuit chapel on West 98th Street in Manhattan.

“I refer to him as the heart of Dignity,” Father McNeill, the author of “The Church and the Homosexual” (Beacon, 1976), said in an interview. “I was doing all the writing, but he was on the front line, meeting with people, counseling people.”

When the Catholic authorities said Dignity could not meet on church property, Father Carter celebrated Mass in apartments all around Manhattan. He led blessing ceremonies for gay couples. He testified in support of the gay rights law proposed by Mayor Edward I. Koch before it was passed by the City Council in 1986. He urged Dignity to march in gay pride parades and marched himself, in his clerical collar.

Although he was a classics scholar, he was also a trained social worker who counseled gay priests and hundreds of lay Catholics. “As I sought to reconcile being gay and Catholic,” Brendan Fay, a longtime gay rights activist, said in an interview, “Bob Carter helped me move from self-hate to self-acceptance and then to a place of gay activism. He was like a Catholic Harvey Milk.”

Robert Earl Carter was born in Chicago on July 27, 1927, the son of Earl and Ila Grace Smith Carter. His father managed several music stores. He is survived by his sister, Nancy Glader of Prospect Heights, Ill.

Father Carter’s parents were Protestants who worshiped in a series of denominations as he grew up. Then, at the University of Chicago, he read James Joyce’s semiautobiographical “Portrait of the Artist as a Young Man.” It introduced him, he wrote, to “the centrality of Catholicism in the history of Western civilization.”

He graduated in June 1946 and the next day was received into the Catholic Church. Three years later, he completed a master’s degree in Greek studies at his alma mater, and in 1953 he received his doctorate there. He entered the Society of Jesus in 1954 and was ordained in 1963.

Father Carter went on to earn a master’s degree in social work from Columbia in 1981. By 1985 he was counseling AIDS patients at Lincoln Hospital in the Bronx; he later became a supervisor of the outpatient AIDS program at the Bellevue Hospital Center in Manhattan.

For him, there was no contradiction between homosexuality and Christianity.

In his memoir, Father Carter wrote: “Since Jesus had table fellowship with social outcasts and sinners, those rejected by the religious establishment of his time, I consider myself to have been most fully a Jesuit, a ‘companion of Jesus,’ when I came out publicly as a gay man, one of the social rejects of my time. It was only by our coming out that society’s negative stereotypes would be overcome and we would gain social acceptance.”