A few weeks ago, I was sent me this anecdote by email:

A friend of Armin’s was recently in Austria to bury her mother.  Her aunts referred to the priest’s “frau”; Sandra thought that was a bit odd because Catholic priests don’t marry, right, but since she isn’t a churchgoer she figured maybe she was just out of touch. So she invited the priest “and your wife” to dinner. He blanched… she repeated the invitation… he accepted. And brought her along.

Apparently this woman was originally the housekeeper, but has become his mistress. The whole parish knows. It’s all widely accepted and understood, although this was the first time she had been invited along like that. (But from the sounds of it, it won’t be the last.)  Another instance, I think, of actual Catholic communities being far more progressive (and human) than the Vatican.

I was interested, but not surprised by this. We know that all around the world, the rule on compulsory celibacy is widely ignored, often openly. In both Austria and Germany there are formal, organized support groups for priests with mistresses. In Italy, a group of mistresses have petitioned the pope to end the celibacy rule so that they could (in effect) come out of the closet.  In Africa, one Bishop was removed from office when knowledge that many priests in his diocese were living openly with their wives and families became embarrassingly commonplace, and another was excommunicated (long after) he followed up his own marriage by actively promoting marriage for Catholic priests. Universal celibacy of Catholic priests is a myth. Any pretence otherwise is sheer hypocrisy. 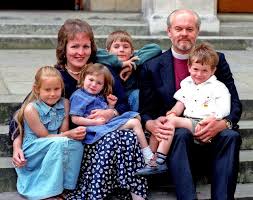 Nevertheless, as long as the rule remains in place, most priests will be obliged to maintain at least the pretence of compliance. This compulsory lie they must live under is inevitably damaging to them – and to the wider Church. Jordan replied to my posting of the “Equally Blessed” press release by arguing correctly that the insistence on compulsory celibacy is doubly damaging to gay Catholic priests, who in turn inflict harm on the wider community of gay Catholics:

While _Equality Blessed_ and other Catholic LGBT groups are on the right track in many respects, the affective, emotional, and psychosexual reformation of the Church must begin in the rectory and seminary. The malignant cancer that is destroying Catholicism from the inside resides not necessarily in the hyper-homophobic statements from the Vatican and the local hierarchy but in the maladjusted homosexual identity of many priests. Many clergymen that craft statements to wound the LGBT laity labor under an exquisite burden of sexual self-hatred. The abuse crisis in part represents an end result of the sadomasochistic tensions that hold the clergy in their place.

We laity (both straight and LGBT) must continue to push for optional clerical celibacy and the freedom for the clergy to live in a sexually healthy and open environment. We the laity must be the catalyst for healthy sexuality in the clergy if the Church is unable or unwilling to reform itself from within. Until the clergy are liberated from the cynical emotional and psychosexual stunting that warps and destroys for the sake of ideology and power, there will be no end to the Catholic hierarchy’s shrill pronouncements against LGBT equality in civil society.

Jordan is right. A healthy teaching on human sexuality is not possible, for gay or straight Catholics, as long as it formulated exclusively by nominally celibate men who are unable to reflect openly on sexual expression from any position of personal experience. Their psychological repression and the ensuing sexual self-hatred on the part of the many priests unable either to live in celibacy or to reconcile their sexual lives and priestly vows is undoubtedly damaging to the church. The connection with child abuse is unclear, but there does appear to be widespread agreement that there is at the very least an indirect connection for some priests: some observers believe the connection is much stronger.

Less widely recognised is the damaging effect of dysfunctional teaching on young gay Catholics, who will frequently experience this teaching as emotional and moral bullying – and even as physical bullying, often leading to contemplated, attempted or completed suicides. On the other side, some who are not themselves gay, will use the teaching as an excuse for bullying of those whom they mistakenly see as “disordered” – or even to homophobic murder.

“Unhealthy psychology cannot be sound theology”, the theologian and psychotherapist Fr John McNeill frequently reminds us.  The rule on compulsory celibacy is worse: it is unsound psychology, but also independently unsound theology, directly contradicted by Scripture, by the Church’s own history, by the experience of the Orthodox and Protestant Christian clergy, and by the Roman church’s own practice, in selectively approving marriage for Eastern rite priests and for  married converts from other faiths. It is also widely ignored.

The only thing more offensive than this damaging hypocrisy, is the complacency with which ordinary Catholics put up with the harm it does to them. It must stop.

One Response to “Celibacy and a Wounded Church: Readers’ Observations”

« Bishops “Protecting Marriage” and the ‘had it’ Catholics
Gay Catholics: the Real Issues »
%d bloggers like this: