The standard response by the CDF (and others who hold power in the Catholic Church) to opinions they do not wish to hear appears to be to censor them. My gut response to censorhip is to do what I can to uncover what has been hidden. Others have the same impulse.

A local example from Minnesota is that of a Catholic school head who has removed two articles from the school on-line magazine which are critical of the local bishops’ political intervention in the gay marriage debate. Fortunately, in an internet age, it is no longer so easy to kill something that has once been published. It was in this spirit that MinnPost has retrieved and published in full the piece published by the editorial board, then removed by the school principal – together with comment on the excellent quality of the writing, a link to a companion op-ed piece on “Life as a Gay Teenager”, and a statement released by the editorial board. 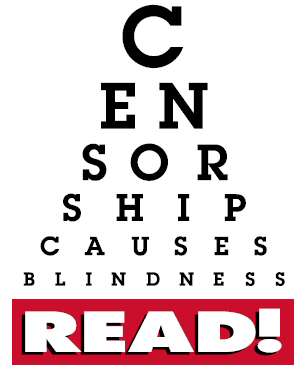 Michael Bayly likewise republishes both pieces at The Wild Reed,  together with some important background information he has gained from his personal experience working in an earlier diocesan program aimed at combating homophobic bullying in Catholic schools – a program that was later ended by the diocese, with disastrous results for gay students. (Michael is the author of a book on the subject,  Creating Safe Environments for LGBT Students: A Catholic Schools Perspective. Read the offending articles, and Michael’s commentary, at his site.

The wonderful irony is that thanks to the glories of modern publishing, the original commentary would have had a limited readership. The attempt to kill it has simply given it global exposure. This was exactly what happened in Canada when a group of rule book parishioners attempted to remove a (celibate) gay altar server from ministry, for fear of possible publicity causing “scandal” to the faithful. Instead, the publicity they brought on themselves similarly brought far greater scandal, world-wide – for the totally unCatholic attempts to pass judgement on a “homosexual person”, and not on his actions (about which they had no knowledge and made no claims).

In an article for the Furrow magazine last March, Father Owen O’Sullivan, a Capuchin, suggested that homosexuality was “simply a facet of the human condition”.

Commenting on church teaching that “homosexuality is unnatural”, he asked whether, if non-procreative sex was wrong, this also meant “that non-use of genital sexuality, as in celibacy, is likewise unnatural”.

This appeared in a theological journal, where it may easily have languished, largely ignored and unread except by specialists. Now however, the CDF has instructed him to cease publishing, except with formal approval. This attempted censorship has made the news (at least in Ireland), and has led me to track down the source of the offensive opinions.  With the help of a chain of links through the blogosphere to an Australian Salvation Army site, I have found extensive extracts from the original article, which I hope to comment on once I have had a chance to properly read and digest them.

In the meantime, here are the links:

When the theologian John McNeill was originally instructed by the Vatican, through his Jesuit order, to cease his writing on gay theology, he originally complied – but later resumed his writing and left the order. His subsequent career as a writer and as a psychotherapist has been of inestimable value in helping countless gay and lesbian Catholics, as well as their families and friends. When the California bishops attempted to derail Fr Jeoff Farrow‘s career over his opposition to Prop 8, one result was simply to give him far greater visibility as a public, Catholic advocate for same sex marriage and LGBT equality. There is a modern echo of the story of St Sebastian: when the original attempted execution did not succeed, he returned to the Emperor and harangued him for his wickedness, just as our modern martyrs in the church (martyred,  that is,  by the Church authorities) do today.

There was a time when the CDF in its original incarnation as the Inquisition had a simple remedy for dissenting opinion: they labelled it heresy, and burned the accused at the stake. In a later period, when this was no longer acceptable to more modern minds, they resorted to a more symbolic execution – they prevented heterodox theologians from teaching or publishing, in a form of professional execution. What they do not yet appear to have realised, is that in the twenty first century, even this is no longer viable. Silencing dissenting voices by bureaucratic fiat may restrict those views being promoted in officially sanctioned institutions, but there are now many alternative forums and media. The US bishops recently responded to the ethicists Salzmann and Lawler (“The Sexual Person“) with a simple declaration that their conclusion were not orthodox Catholic teaching. Their warning had no effect, and may have been counter – productive: the book’s sales are strong. When I recently tried to order a copy, I found that the UK local publisher had run out of stock.  So it is with the modern martyrs in the church. When the authorities attempt to impose their professional executions, very often the intended victims simply emerge with louder and stronger voices.

Rather than relying on the stake or the censor’s stamp, Church leaders must recognize that in the modern world, the appropriate response to critical thinking is with reasoned analysis. My reader John (from Suffer the Arrows) has put this very clearly and succinctly in a comment to a previous post (The End is Not in Sight, but the Journey Has Begun) :

This very hopeful message underscores two important points. First, conversation and discussion are always good, and help us to discover and act upon the truth. When a church tries to stifle discussion, and force silence upon its members, it is announcing that that church finds its positions more important than the truth. This is the current situation of catholicism. The second point is this: the level of theological sophistication and the strength of theological argumentation are on the side of those who are rethinking the traditional teaching. Those who support the traditional thinking speak in slogans and in the language of power. Our side is more likely to have thought deeply on this subject

The Church and the Homosexual

Both Feet Firmly Planted in Midair

Taking a Chance on God: Liberating Theology for Gays, Lesbians, and Their Lovers, Families, and Friends

One Response to “The Futility of (Attempted) Church Censorship: Minnesota, Ireland.”