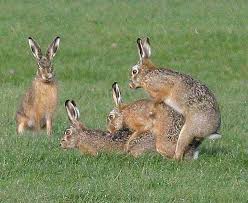 O’Sullivan shows that the very word is a slippery, dangerous one, with multiple meanings and connotations – both positive and connotations.  In Victorian times, Europeans used the word pejoratively to justify the colonial exploitation of Africa, but also used a concept of the “natural order” of things to justify a diverse set of  racial, political, social and cultural agenda. Today, it is often used as a recommendation, such as for foodstuffs and herbal remedies – but used selectively. Deadly Nightshade, for instance, is every bit as “natural” as peppermint or organically grown potatoes – but will not be found in health food shops or organic greengrocers.

He also notes that reasoning from human physiology (i.e. the argument from plumbing) is also a poor application of the concept of “natural” to human sexuality – else why do men have nipples? Even the CDF itself, in its Letter on the Pastoral Care of Homosexual Persons, warns against this simplistic reductionist reasoning.

I like his emphasis on the diversity of experience to be found within both homosexual and heterosexual contexts. The CDF Letter, as I have said before, sets up an entirely misleading contrast between heterosexual loving conjugal relationships and homosexual pursuit of self-gratification. O’Sullivan reminds us that

O’Sullivan, in fact does not offer one definition of what the theologians mean by “unnatural”, I suspect because there is not a single meaning for them, any more than for other people. Boswell has shown that both Aquinas and the earlier writers who influenced him used “natural” in different ways,  both as commendation and as damnation, depending on the specific purpose. Others claim that “natural” refers to God’s “purpose” in creation. To me, this simply begs the question – how are we to know God’s purpose? To claim to have achieved such absolute knowledge is simple human arrogance, as is amply demonstrated by similar claims in earlier times that slavery, the subordination of women, or South African apartheid were part of God’s purpose.

It is also simplistic to claim, as many do, that the obvious “purpose” of sex is to produce children, because the human race needs to reproduce to survive. The human race also needs to grow food to survive – but that does not mean we must all become farmers. Besides, if the argument were valid, the Church should be opposing celibacy as vigorously as it opposes homosexuality.

The only way to make sense of the term “natural” in any discussion of sexual ethics is to see it as irrelevant. On human sexuality, “Nature” is morally neutral. In the continuing search for a sound sexual ethic, we must look elsewhere.

« “Adultery”, and the Problem of Heterosexuality, Revisited
US Nuns Are Revolting – at Bishops’ Double Standards. »
%d bloggers like this: