What Part of the Gospels, Bishop Soto, is “Hard for Gays to Accept?”

An interview with Sacramento Bishop Jaime Soto, published in the Sacramento News and Review, neatly illustrates the muddled thinking and selective morality we so often hear from bishops and other spokesmen for Catholic orthodoxy. In a wide-ranging interview,  Jeff von Kaenel engaged the bishop in discussion on a slew of questions that in his view, many loyal Catholics who are troubled by selected elements of Church doctrine or practice would like to put to him if they had a chance:  on the reasons so many people are simply turning away from participation in the sacramental life of the church,  on the strict prohibition on women’s ordination, on abortion and contraception, on homosexuality, on clerical abuse. 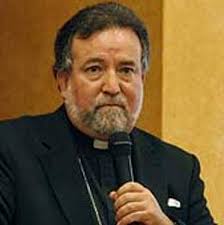 The response on homosexuality is revealing:

von Kaenel: Is there a welcome mat out to our gay readers who grew up Catholic?

Soto: The welcome mat is definitely out, because the good news of the Gospel is for everyone. And I think it is good news, and I think it is a message of hope for everyone. I recognize that for many gay people, as well as others, that there are certain parts of the Gospel that are hard to accept. I still encourage people to come hear us, to come be part of the community life, be part of a parish, because I do believe that the Gospel is persuasive, and I do believe that we have a message that gives hope and a message that saves. It’s important for us, as it was important for Jesus, to leave the door open so that people can hear us and know us and make their decision as to whether they can walk with us.

This sounds reasonable, but is in fact extremely nasty. The response is presented in the framework of the Gospels, and (quite correctly) states that the good news of the Gospel are for everyone, that the Gospel has a message that gives hope, and that is important for the Church, as it was for Jesus, to leave the door open for all.  But here’s the catch – he states that some parts of “the Gospel” are hard for gays to accept, implying that is where the Church’s homophobia is rooted, It is not. As has often been pointed out, and as Bishop Soto really should know, there is not a word in any of the four Gospels, nor in the Acts of the Apostles, that says anything at all about homoerotic relationships or activities. On the other hand, there are several passages that insist on the importance of inclusion and against passing judgement on anyone. There are also some passages that imply Christ’s acceptance of such relationships (for example, the story of the Roman centurion and his servant/lover),  and even some that suggest he may have  had such a relationship himself with the “beloved disciple”. The Gospels are not opposed to homoerotic relationships, but supportive of them. The Gospels’ values are not those of the so-called “traditional” family, but distinctly queer.

This is an important point for gay and lesbian Christians to understand clearly: the opposition from within the Church is emphatically not based on anything in the Gospels. It is not even clear that it is well founded in the rest of Scripture, as current debates in several Protestant denominations, and amongst modern biblical scholars (William Countryman, for instance) are showing, or in the teaching or practice of the early Christians. Rather, as the historian John Boswell has demonstrated, the Christian church over the centuries gradually adapted its teaching to follow the rising prejudice and hostility of the population. The arguments from Scripture or from the early theologians have been selected and distorted to justify existing prejudice. Bill Lindsey at Bilgrimage has this important quotation from Peter J Gomes’ “The Scandalous Gospel of Jesus”:

If there remains one area in which our parochial obduracy continues to obtain, however, it is in the church’s treatment of its homosexual brothers and sisters; if there is an area in which we are to be weighed and found wanting, this is it.  It is not out of ignorance alone that we behave as we do towards sexual minorities; it is out of ignorance, fear, and in certain cases, malice.  None of it is excusable: private judgment on sexual matters does not excuse our unwillingness to include in full participation in the household of faith those who engage in sex differently.  Two generations of biblical scholarship have shown that the scriptures cannot be used as a basis for our discrimination on the subject of homosexuality, so why are our churches as divided today on this subject as they were a generation ago on the subject of women, or a century ago on the subject of slavery? (p. 199).

Thus I have been disappointed, to say the least, to find that the Bible becomes the first refuge of those who are unwilling to reconsider their extrabiblical prejudices against including homosexuals in the full life and ministry of the church.  I had hoped that, as has happened with women and racial minorities, our predominantly Christian culture would recognize that God’s children, the homosexuals in our midst, cry out for compassion and acceptance.  In this decade, alas, exactly the opposite has happened.  Positions have hardened and homosexuals have been demonized, condemned to a ‘lifestyle’ rather than invited to a life in the household of faith.  It amazes me that any thoughtful homosexuals would continue to want any part of a community, religious or otherwise, that in the name of God has behaved toward them with such contempt (p. 200).

So, I put a challenge to Bishop Soto, or to any body else who would like to speak on his behalf: just which are the parts of the Gospels that you believe are “hard for gays to accept”?

6 Responses to “What Part of the Gospels, Bishop Soto, is “Hard for Gays to Accept?””

« So, Let’s Talk About – Condoms and AIDS Prevention
Illinois Civil Unions – Welcomed by Some Religious Leaders »
%d bloggers like this: