Coming out as Grace: Patrick Chen, on the “Out Christ”

December 10, 2010 — Terence
In the second instalment of his long essay on Christology, sin and grace at “Jesus in Love Blog”, the theologian Patrick Chen discusses Christ’s incarnation as God “coming out” to the world. This is an idea I first came across in Chris Glaser’s “Coming out As Sacrament

“, and which Chen takes as his starting point:

Chris Glaser, the gay theologian and Metropolitan Community Church minister, has written about the Out Christ in his book Coming Out as Sacrament

.  In that book, Glaser describes Jesus Christ as nothing less than God’s very own coming out to humanity:  “The story of the New Testament is that God comes out of the closet of heaven and out of the religious system of time to reveal Godself in the person of Jesus the Christ.” 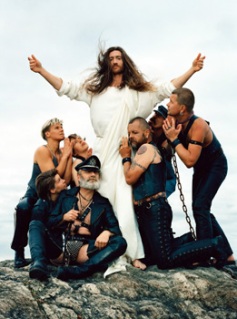 “Sermon on the Mount” (from Ecce Homo) by Elisabeth Ohlson Wallin

In Chen’s thinking, this model see Christ’s coming out as including coming out in solidarity with the marginalized and oppressed, and leads us to the concept of sin as the closet:

Not only does the closet prevent a person from truly connecting with others, but it has a corrosive effect on the self-esteem and well-being to the extent that she is constantly forced to keep her life a secret to others.

(This view of the closet as sinful because it restricts proper relationships with others is similar to the argument of the Jewish lesbian Judith Plaskow, who sees coming out as a religious obligation, for precisely the same reasons).

The continuing theme throughout Chen’s series is a Christological model of sin and grace, seen from an LGBT perspective. It is not enough to discuss sin without similarly considering grace which leads us out of it. From this perspective, the grace that redeems us from the sin of the closet is the courage given to us to come out.

By contrast, grace in the context of the Out Christ can be understood as the courage to come out of the closet, or sharing one’s sexual orientation and/or gender identity with others.  For LGBT people, the process of coming out can be understood as grace, or a unmerited gift, on the part of God.  There is no one correct pattern or single path to coming out.  Some people come out very early in life; others wait until much later.  For some people it is a slow and private process.  For others, it is a fast and public announcement.

Regardless of how one ultimately comes out, the act of coming out reflects the very nature of a God who is also constantly coming out and revealing Godself to us in the Out Christ.  Coming out is a gift that is accompanied by other gifts such as self-love, the love for others, and the overcoming of shame and internalized homophobia.  The grace of coming out is not something that can be “willed” or “earned”; it can only happen as an act of grace from God.

Read the full post at Jesus in Love blog, where you can also follow the full series:

Cheng, theology professor at Episcopal Divinity School in Cambridge, MA, adapted the series for the Jesus in Love Blog based on his essay in the new book “Sexuality and the Sacred: Sources for Theological Reflection

The picture for this post is the one used by Kittredge Cherry, who says of it:

The photo for this post, “Sermon on the Mount,” was taken in a famous cruising park in Stockholm with LGBT people from local leather clubs as models. “It was fantastic to walk with ‘Jesus’ to the photo spot. People were looking and a little shocked,” recalls photographer Elisabeth Ohlson Wallin in my book “Art That Dares

« Building a Welcoming Church: Use Our Stories
Building Sexual Theology From the Ground Up »
%d bloggers like this: