Pope Benedict, on the Priesthood

Before I elaborate on Pope Benedict’s views on gay men and the priesthood as expressed in “Light of the World”, I want to put this into the broader context of his views on the priesthood generally, and some other observations on sexuality.  Before doing that, I just want to post verbatim the relevant specific questions that Peter Seewald put to him, and his responses. First, I place here his quoted observations on the priesthood. In a companion posting, I do the same with his responses on divorce and contraception. The questions are lightly edited, to remove some of Seewald’s less relevant remarks, or those which are specific to Germany. Benedict’s responses I have quoted in full.  (My own reflection on these responses will follow shortly). 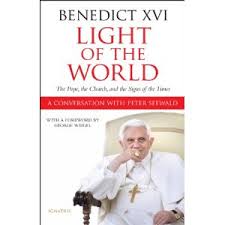 Seewald: It always seems that celibacy is to blame for everything, whether it’s sexual abuse, the exodus from the Church, or the priest shortage…… We have reached a point where even bishops recommend that we exercise “the imagination” to “enable the service of married men as priests alongside the basic form of celibate priesthood”.

I can certainly understand that bishops would reflect on that, given the confusion of the times. But things get complicated when it comes to say what such coexistence of the two forms would actually be supposed to look like. I believe that celibacy becomes a very meaningful sign, and above all becomes possible to live, when priests begin to form communities. It is important for priests not to live off on their own somewhere, in isolation, but to accompany one another in small communities, to support one another, and so to experience, and constantly realize afresh, their communion in service to Christ, and in renunciation for the sake of the Kingdom of heaven.

Celibacy is always, shall we say, an affront to what man normally thinks. It is something that can only be done and is only credible, if there is a God and if celibacy is my doorway into the Kingdom of God. In this sense, celibacy is a special kind of sign. The scandal that it provokes consists precisely in the fact that there are people who believe these  things.  By the same token, this scandal has a positive side.

Seewald: The impossibility of women’s ordination in the Catholic Church has been clearly decided by a “non possumus” of the supreme Magisterium. The Congregation for the Doctrine of the Faith laid this down under Paul VI in the 1976 document Inter insigniores, and John Paul II reinforced it in his 1994 apostolic letter Ordinatio sacerdotalis.  In this document, speaking in virtue of his office about the “divine constitution of the Church”, he writes – and these are his exact words – “that the Church has no authority whatsoever to confer priestly ordination on women and that this judgement is to be definitively held by all the Church’s faithful”. Critics see this as a form of discrimination.  The only reason Jesus did not call women to be priestesses, it is said, is that this would have been unthinkable two thousand years ago.

That is nonsense, since the world was full of priestesses at the time. All religions had their priestesses, and the astonishing thing was actually that they were absent from the community of Jesus Christ, a fact that in turn is a pint of continuity with the faith of Israel.

John Paul’s formulation is very important: the Church has “no authority” to ordain women. The point is not that we are saying that we don’t want to , but that we can’t.  The Lord gave the Church a form with the Twelve and, as their successors, with the bishops and the presbyters, the priests.  This form of the Church is not something we ourselves have produced.  It is how he constituted the Church.  Following this is an act of obedience.  This obedience may be arduous in today’s situation. But it is important precisely for the Church to show that we are not a regime based on arbitrary rule.  We cannot do what we want.  Rather, the Lord has a will for us, a will to which we adhere, even though doing so is arduous and difficult in this culture and civilization.  Incidentally, women have so many great and meaningful functions in the Church that there can be no question of discrimination.  That would be the case if the priesthood were a sort of dominion, whereas it is actually intended to be pure service.  If you look at the history of the Church, women  – from Mary to Mother Theresa –  have so eminent a significance that in many respects they shape the image of the Church more than men do. Just think of major Catholic feast days such as Corpus Christi or Mercy Sunday, which originated with women. In Rome, for example, there is even a church where not a single man can be seen in any of the altarpieces.

On homosexuality in the priesthood:

Seewald: It is no secret that there are homosexuals even among priests and monks. Just recently there was a major scandal on account of the homosexual passions of priests in Rome.

Homosexuality is incompatible with the priestly vocation. Otherwise, celibacy itself would lose its meaning as a renunciation. It would be extremely dangerous  if celibacy became a sort of pretext for bringing people into the priesthood who don’t want to get married anyway.  For, in the end, their attitude to man and woman is somehow distorted, off centre,  and in any case is not within the direction of creation of which we have spoken. The Congregation for Education issued a decision a few years ago to the effect that homosexual candidates cannot become priests because their sexual orientation estranges them from the proper sense of paternity, from the intrinsic nature of priestly being. The selection of candidates to the priesthood must therefore be very careful. The greatest attention is needed here in order to prevent the intrusion of this kind of ambiguity and to head off a situation where the celibacy of priests would practically end up being identified with the tendency to homosexuality.

Seewald: But there is no doubt that homosexuality exists in monasteries and among the clergy, if not acted on, then at least in  non – practised form.

Well, that is just one of the disturbing problems of the Church. And the persons who are affected must at least try not to express the inclination actively, in order to remain true to the intrinsic nature of the office.

3 Responses to “Pope Benedict, on the Priesthood”