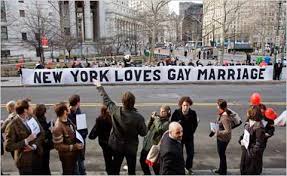 More New Yorkers are supporting gay marriage, with a highest-recorded margin of 56 to 37 percent, a new Quinnipiac University poll has found.

This compares to its previous high of 51 to 41 percent support, measured in a June 2009 survey.

The breakdown of support for gay marriage was:

“Gov. Andrew Cuomo didn’t make a big issue of same-sex marriage in his state-of-the-state speech, but he said he was for it and so are most New Yorkers, said Maurice Carroll, director of the Quinnipiac University Polling Institute.