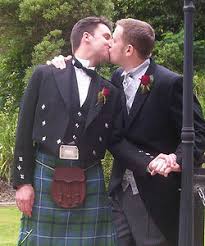 The hysteria in this post and the previous one against the supposed restriction of religious freedom and the so-called redefinition of marriage is entirely misplaced.

The British proposals will not in any way restrict religious freedom, but are specifically designed to expand it. This initiative was specifically requested by some churches, who objected to the current restriction in the legislation, which prevents them from conferring religious recognition on their members who enter civil partnerships. The attempts by Catholic and Anglican bishops to oppose the legislation do not represent the protection of religious freedom, but instead restrict that freedom by attempting to impose their own religious views on other faiths.

The complaint of redefining marriage is simple hypocrisy. Marriage takes many forms in different parts of the world, and has been constantly redefined throughout history – from a polygamous, patriarchal institution in the Old Testament, to a contractual arrangement to protect property and inheritance rights, through intervening forms to the very modern idea of marriage as the culmination of a romantic relationship between two people. Why should it not continue to evolve, to include relationships between two people of the same biological sex?

The church itself has constantly redefined its own view of marriage – for more than half its history, it did not treat it as a sacrament, or even require marriage in church – except, oddly, for priests. One of the most fascinating chapters in Salzmann & Lawler’s “The Sexual Person” demonstrates how the Catholic Church redefined the process of marriage – from one that began with a personal contract and the start of cohabitation, and culminated in a public wedding ceremony (possibly with the onset of pregnancy), to the modern idea that marriage is an event, focused on the marriage ceremony that previously came rather late in the process. This is just one more of the many ways in which something that is too often described as “traditional” marriage is in fact a very modern invention.

Obviously, physical procreation is one of the ends of marriage, but not the only one – or even the most important one, as both Vatican II and Pius XI’s Casta Connubii make clear – there is no hierarchy in the goods of marriage.  As I read Pope Benedict’s praise of marriage and family, it is clear to me that the value of marriage, as an institution that contributes to social stability, to the sound rearing and moral education of children, and as the protector of the elderly, apply as much to families headed by same sex couples as to any other.

What we really need to recognise here is that even if it were true that the proposal were to introduce provision for full marriage equality (and that may well come later, as a result of the consultations that will now take place on the subject), this would still not be a restriction on religious freedom, but its expansion.  There are now many denominations that have approved or are moving towards approval of partnered, openly gay or lesbian clergy in committed, faithful relationships, and accountable in these relationships to their congregations. The inevitable consequence will be that they will need to provide public services of commitment in which these pastors, and other members of their congregation, can make those vows of commitment to their partners, just as others do in marriage. Approval for same sex weddings in church has not yet come to quite the same extent as for LGBT clergy, but it must surely follow.

Even now, there are some denominations, among the US Mainline Protestants and the European Lutherans which have formally approved full church weddings without discrimination, while others have made provision for blessing of same sex unions (without full weddings), or have given local jurisdictions the authority to take their own decisions – as some have done, for example with the widely reported wedding in Boston’s Episcopal cathedral last month of two lesbian senior clergy.

Even inside the Catholic church, there are an increasing number of voices calling for recognition of the sacramental value of marriage and publicly committed relationships. Last year, Cardinal Christoph Schonborn observed that it is time that the Catholic Church move beyond  it current obsession with “homosexual acts” and consider instead the quality of the relationships. Several other bishops later said much the same thing – which appears to be a majority or near-majority view among  the church’s professional theologians – and among a clear majority of lay Catholics. Even some clergy are risking their careers by going public with their support for same -sex marriage: Fr Geoff Farrow in California over Prop 8, a group of Argentinian priests who spoke up in support of the family equality legislation last year, and Fr Joe Palacios, who joined with other clergy in arguing for marriage equality in Maryland, as can be seen in the Youtube  video below:

The interfaith council lead by the “Standing on the Side of Love” campaign, gathered together religious leaders of many faiths and denominations; from episcopal, to Catholics, to Jewish, to Southern Baptist and many others.  All spoke from a perspective as to why they feel their faith should support marriage equality for same-sex couples. This is father Joe Palacios comments from the Catholic perspective.

Andrew Sullivan calls this the “money quote” from Fr Palacios:

Here in Maryland – the cradle of Catholicism, of the American Catholic Church – we have a long history of Catholics forging a new path for justice and freedom for all.

For this South African, who grew up, was educated in Catholic schools, and lived for over half a century against the background of the rise and fall of Apartheid and was part of the part played by the Catholic Church in its eventual destruction, the necessity for the church to be a part of “forging a new path for justice and freedom for all” is axiomatic. It is tragic that on this issue, the designated leaders of the church are not standing on the side of justice, but attempting to resist it. For the real struggle for justice, we must look not to the oligarchs of the institutional church, but the the real church – the lay people, courageous priests, religious sisters and prrofessional theologians who are more in tune with the Gospels and the movement of the Holy Spirit, than with canon law.