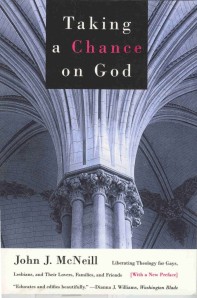 John McNeill was hounded of  the Society of Jesus for his writing, but while you can take  the man out of the Jesuits, you cannot take the Jesuit out of the man. I revelled in the obvious framework of Ignatian Spirituality in which this book is couched, with its emphasis  on ‘finding God in all things’; ‘trust; and ‘thanks be to God.’ I also liked his emphasis on developing a mature faith life, as opposed to the automatic following of rules that we were too often brought up to.  The Vatican party line has left many of us feeling weary, bludgeoned  and defensive.  We all need some form of spiritual self-defence – this book goes a long way to providing it.

What I like especially about this book, is the emphasis on the positive.  McNeill frequently reminds us that the Christian experience above all should be one of joy – notwithstanding the impression often created by the institutional church.

Taking a Chance on God

Part One
Growing Up in Our Faith: Spiritual Life and the Gay Experience

Intro: Feeling the Presence of God.
Ch 5: Dealing with Anger
Ch 6: Liberation from Fear
Ch 7: Lifting the Burden of Guilt, Shame and Self-Hate.

Intro: Say the Word and I Shall Be Healed.
Ch 8: Trusting in God
Ch 9: Thanks be to God
Ch 10: Reconciliation and God’s Presence

Intro: Hospitality and the Sodom Myth
Ch 11: The Spirit of Hospitality
Ch 12: The Virtue of Compassion

Part Six:
Unto Dust You Will Return

Intro: AIDS and the Acceptance of Human Mortality.
Ch 17: The Christian understanding of Death, Resurrection, and Time.
Ch 18: Reflections on Judgement.
Ch 19: Reflections on Mourning.

Part Seven
The Necessity of a Gay Spiritual Community.

Epilogue:
A Liberation Spirituality Based on Gay and Lesbian Experience.