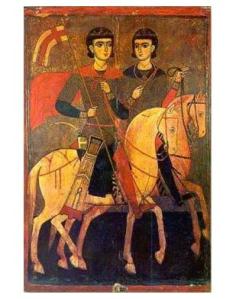 The best known of the supposed gay saints, Sergius & Bacchus, were a pair of Roman soldiers and supposed lovers who were martyred in the 4th century, and later recognised as saints.

There are two problems with this.In the first place, the historical facts are not absolutely agreed.  While they are historical figures, it is not entirely certain that they were lovers, nor are the reasons for their execution entirely clear. Nor is their status as saints beyond dispute.  The modern criteria and process for canonisation are well-established, but this was not so in the early church, when the process was informal, by a process of popular acclaim.
The entry in the Advent Catholic Encyclopedia accepts their status as saints and martyrs, with a joint feast day of October 7th, but I have seen entries for Sergius & Bacchus in one modern reference book on Catholic saints,  another stated that they have been ‘purged’ from the list of recognised saints, together many others from the remoter past, as having insufficient foundation for that status. (Catholic Online states that their ‘cult’ was suppressed in 1969.)

One Response to “SS Sergius & Bacchus”