For the Ordinariate – There’s Just No Escape.

‘Durex’ Has Links with Ordinariate Horror!

As members of the Ordinariate, we are MORTIFIED to discover Durex is advertising RC masses on its website for condoms. We devout Roman Catholics are not allowed to wear rubbers, especially during Divine Service. Yesterday, some of our former-Anglican brethren were ordained RC ministers by wicked Archbishop Vincent Nichols. This “revisionist” clergyman allows Masses for Poofs in a RC Church in Soho, London. This blasphemous service is shown on the Durex site, aimed at promiscuous homosexualists. The reason we joined the Ordinariate was to escape from women, sinners and homos. Pooftahs are allowed their own mass – in Vincent Nichols’ Diocese! As former-Anglicans, our role now is to purify the RC Church of all sin. Having escaped from lesbians and other women in the Church of England, we now discover the RC Church has them as well!. Our aim is to cause the same amount of trouble for the Pope as we did for ++Rowan Williams when we were members of his Sect. We have always been trouble-makers. And we’re not stopping now!

Last year, the Swedish government and the state church, the Swedish Lutheran church, between them approved legal recognition for same sex marriage including church weddings – the first country in the world where this has happened. At the time and since, I have noted that other Scandinavian countries were likely to follow suit: I know that the subject has been discussed (out of the public eye) by church authorities in all of them. Now the Finnish Lutherans have taken a public step in that direction. 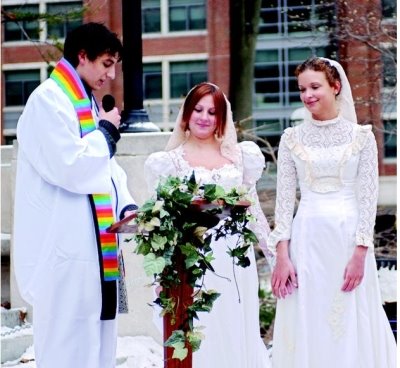 END_OF_DOCUMENT_TOKEN_TO_BE_REPLACED

There is no longer any doubt in my mind that widepread, formal recognition by Chrisitan churches of same-sex unions, by liturgical rites in church, is on the way – one small step at a time.

One of these small steps is in the diocese of Toronto, where the local archbishop has given pastoral guidelines for blessing same sex unions. Technically, the impact will be only local, in his own archdiocese, and limited to a simple blessing, not full marriage. Effectively, though, this one of those small steps that makes subsequent strides that much easier. Civil marriage for same sex couples is already a well-established fact of life in Canada. Church blessings in Toronto will soon spread across the nation, just as civil marriage did after a purely local introduction. From country-wide blessing of civil unions, to blessing civil marriages, to full church weddings, will be easy steps. Sweden already has gay and lesbian church weddings in the Lutheran church, with which Anglicans and Episcopalians are in communion. Other Scandinavian churches will soon follow suit – as will Canadian Anglicans, just a little later. 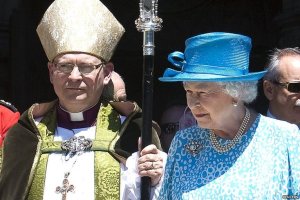 END_OF_DOCUMENT_TOKEN_TO_BE_REPLACED

Anglican Inclusion as Toronto Welcomes the Queen – and the “Queens”.

By a happy chance, the visit of Queen Elizabeth to Toronto on Saturday coincided with Toronto’s Pride parade later the same day.

Joining the crowd were two gay men, Randy Pierce and Kim Hutchinson, who had just met a week ago. The pair, who wore khaki shorts and short-sleeved dress shirts, had come to see the Queen.

“We’re here to see the real Queen and the other queens,” Mr. Pierce said, outlining the couple’s plans for Sunday. “We’ve got time to leave and change and put on our happy gear. We had to tone it down for the real Queen, and spice it up for the others.”

The synchronicity provided an opportunity for a timely and thoughtful reflection by Douglas Stoute, Dean of St James Cathedral, on the theme of inclusion in the church, in a sermon calling for the Anglican Church to hold a “respectful, inclusive dialogue with all God’s people”.

“The church is undergoing a rebirth,” the Very Reverend Stoute told the congregation. “It is at times destructive.” He noted that some in the Anglican church have sought to defend traditional biblical ideas of who belongs and who does not, a reference to a schism in the Anglican church over the blessing of same-sex unions.

“A church grounded by inclusiveness and openness is becoming more relevant,” he said.
“Polarization within Anglicanism is not new,” Rev. Stoute added, noting the 16th-century division between Catholicism and Protestantism and the 19th century dispute between high church and low church.

“Throughout history Anglicanism has sought to find a middle road,” he added. “It is a recognition that we do not have all the answers. It requires that we let go of pride and reach out to listen with open minds and open hearts.”

This is timely on two counts. The Canadian church recently disappointed by fudging a decision on church blessing for same-sex partnerships. Last year, the proposal was passed by a comfortable majority, but failed nevertheless because the proposal needed separate majorities from each of laity, clergy and bishops  – and comfortable majorities in the first two groups sat alongside a narrow loss among the bishops. This year, early expectations were that a fresh vote would get the three separate majorities required. This did not happen. Although the atmosphere was reported to be more conciliatory, with an increased commitment to listening to each other, the fact remains that the church remains divided, and has failed to accept a decision on inclusion that has the support of a clear majority overall. The Canadian church would do well to take Dean Stoute’s words to heart.

Meanwhile, back in the UK, an announcement is expected later this week which will confirm the first openly gay Anglican bishop, joining the Episcopalians Gene Robinson and Mary Glasspool in the US, and Eve Brunne in Sweden as the world’s first openly gay or lesbians selected for ordination as bishops. (There have been openly gay bishops before, but in the earlier cases, they were not open about their sexuality until after selection).

When the Anglican Church appeared set to ordain an openly gay bishop back in 2003, one of those vocally and aggressively opposed was Bishop James Jones, of Liverpool. However, he later apologised for this aggression, and undertook to listen more to other views on sexuality. As I have noted before, when people can be persuaded to listen with an open mind, views begin to change. Earlier this week I wrote about the conversion journey of the US Presbyterian theologian Dr Mark Achtemeier, who describes himself as both conservative and evangelical (“And Grace Will Lead Me Home“). In his case, the conversion was complete, and now argues actively in favour of full inclusion in church, including same sex marriage and ordination. 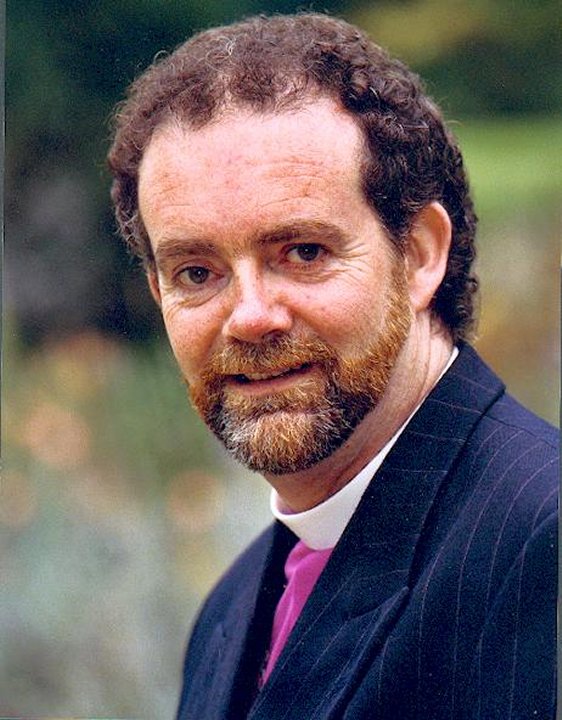 Bishop James, who is associated with the evangelical wing of the UK Anglican Church, does not seem to have gone quite that far (not yet), but he does now argue for recognition that differing views and interpretations of Scripture are possible. He recently voted in favour of a decision to grant pensions to civil partners of gay clergy. With the formal confirmation of the USA’s first openly lesbian bishop expected within weeks, he is encouraging his fellow evangelicals not to overreact to this. He has also said that he is “in sympathy” with the House of Lords amendment this week which will allow religious premises to be used for Civil Partnerships.

The evidence is clear. Difficult as it is, we need to find ways to speak to those who are so opposed to us. Many will not listen, and will remain rigidly wedded to their preconceptions. But where we can engage a few, we must. In listening, they will modify their own views. Thereafter, they will help to modify the views of others. The Holy Spirit is clearly working in this matter to “renew the face of he earth”. She deserves our help.

Some extracts from “Ekklesia”:

The Bishop has not explicitly abandoned his longstanding view that same-gender sexual relationships are unethical. However, he appeared concerned not to condemn same-sex couples when, in his words, “in a world of such little love, two people sought to express a love that no other relationship could offer them”.

The amendment recently approved by the House of Lords will give churches the freedom to host same-sex partnership ceremonies if they choose, but will not require them to do so. However, Michael Scott-Joynt, the Bishop of Winchester, has been widely criticised for suggesting that the law will allow clergy to be sued for refusing to carry them out, a claim inaccurately reported as fact in parts of the media.

In contrast, James Jones’ comments are in tune with those evangelicals who have shifted their position on homosexuality in recent years. There are now several evangelical organisations which accept the validity of same-sex relationships.

In a particularly controversial section of his remarks, Jones challenges the notion that sexuality is a matter of choice, saying instead that it is a “given”.

The Bishop compared the Church’s divisions over sexuality with its ability to accommodate a variety of attitudes to war. “On a number of major moral issues, the Church allows a large space for a variety of nuances, interpretations, applications and disagreements,” he said.

“The day is coming when Christians who equally profoundly disagree about the consonancy of same-gender love within the discipleship of Christ will in spite of their disagreement drink openly from the same cup of salvation,” he added.

“This is both a strong affirmation of gay relationships and a confirmation of Anglican tradition,” said Coward.He added that Anglican tradition meant that “differences in attitude to homosexuality are not church-dividing and that Christians can live together in one church community respecting each other’s convictions”.

Amidst the reams that have been written about the proposed welcome to disaffected Anglicans, most commentaries have focussed either on the affront female  and gay Catholics of welcoming some people whose main motivation is opposition to women or gay clergy, or on the prospect that this will reopen discussion on compulsory celibacy for priests.

Now Commonweal has raised another controversial issue that will likely be raised afresh.  The Anglican communion resolved as long ago as the Lambeth conference of 1930 that contraception was not necessarily wrong.  Today, there are few Anglicans who regard contraception as a moral issue. 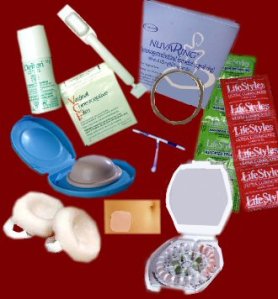