The “Impact” of Iowa Marriage Equality – Findings From Evidence.

September 9, 2010 — Terence
One important feature of Judge Walker’s verdict in the Prop 8 trial was his finding that the case against marriage equality rested on claims, of the “harm” done by same sex marriage and the supposed threat to children is based on no evidence whatsoever. The substantial evidence that does exist on gay parents, and the experience from Manhattan and the Netherlands where marriage is well established, is that there is indeed no demonstrable harm – to between sex marriages, or to the children of same-sex couples. 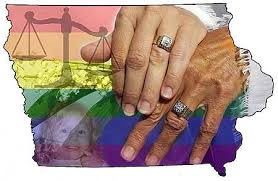 Now yet another independent survey, this one from  Iowa, shows the same finding. “Iowawatch” is an online news service for The Iowa Center for Public Affairs Journalism, an independent, nonprofit and nonpartisan news service. Their researchers conducted interviews with married couples and professional experts, and examined extensive published urnal articles, marriage statistics, census data, polls and court rulings.
The conclusion? There is no “harm” – at least no more than from the between sense marriages they so closely resemble. These are extracts from an extensive report at Press Citizen: END_OF_DOCUMENT_TOKEN_TO_BE_REPLACED
51.095649 -0.712811
Posted in gay marriage. Tags: family equality, gay marriage, Iowa gay marriage, research evidence. Leave a Comment »

Yet Another Court Victory for Gay Marriage, Family Equality:

In barely a week, there have been four important court judgements in three American countries that represent important victories for gay marriage and family equality. Immediately after the celebrated judgement in California striking down Proposition 8, the Mexican court ruled that the legal provision for gay marriage in Mexico City was fully constitutional. Yesterday, that same court ruled that marriages in Mexico City must be recognized, and the associated benefits granted, right across all Mexican states. Also yesterday, the court in Costa Rica ruled that a proposed national referendum on civil unions, may not go ahead. There may well be another important advance coming within days: the Mexican court is due to pass judgement on a matter concerning gay adoptions, possibly as soon as tomorrow. END_OF_DOCUMENT_TOKEN_TO_BE_REPLACED

It’s been a long night waiting for confirmation, but Argentina has just become the latest country, and the fourth strongly Catholic country, to approve family equality, even in the face of vigorous, highly visible,  opposition by the Catholic  Church. (Note that I do not describe this as “gay marriage”. The legislation which has been approved includes much more than just provision for same -sex marriage.)

Rainbow Flag Outside the Argentinian Parliament!

What is particularly pleasing to me was that while the political argument in favour was based on human rights grounds, many of the supportive politicians made clear that their support was because of their Catholic faith, which emphasized the importance of respect for those human rights.

In their marathon debate, a number of senators in the 72-member upper house referred to their Catholic beliefs in presenting their reasons for opposing or supporting the bill.