The Fall of Rome, Reality Based History – and Gay Adoption

The vocal opponents of family equality are fond of making sweeping statements (in flagrant disregard of the evidence) about how marriage has “always” been between one man and on woman, how the proponents of equality are “redefining” evidence, quite ignoring the ways in marriage has been constantly redefined in the past – not least by the Christian churches. A variation on the theme has been that homosexuality has destroyed great civilizations, such as that of Rome. Illinois state Rep. Ronald Stephens has repeated this claim, blaming “open homosexuality” for the fall of Rome.

In a fun, sane response in the Chicago Sun-Times, Neill Steinberg dismisses the claim, basing his response on, well, historical fact, not what he calls Stephens’ talking points. His most important observation is that the best known extensive study of the fall of Rome, Edward Gibbons “Decline and Fall of the Roman Empire“, concluded that Roman civilization collapsed not because of homosexuality, but because of – guess what? Christianity.

Would that be a argument to ban Christianity today, for fear that it could cause the collapse of modern Western civilization?

The point I want to make is not that Gibbons was either right or wrong, but to heartily endorse Steinberg’s larger point, that grand claims about the lessons of history really ought to be checked against the facts. This is certainly true in the secular sphere, but also in religious discourse. The often -repeated Vatican claims of Catholic “constant and unchanging tradition” are a smokescreen, often used to used to hide the importance of recently introduced changes, as Martin Pendergast noted recently, writing about gradualism in Benedict’s theology.

But today, I do not want to explore this theme of the Church’s constantly changing tradition. Let’s just enjoy, instead, Steinberg’s thoroughly delightful response to rep Stephens’ ignorance. Here are some extracts: END_OF_DOCUMENT_TOKEN_TO_BE_REPLACED

What Constitutes a “Family”? Empirical Study Finds A Wider View

Religious conservatives are regularly referring to the “traditional family” as a foundation for their beliefs, but there is no such thing. The conservative interpretation of the so-called traditional family is  a relatively modern invention, created to fit the conditions of the nineteenth and twentieth centuries in Western Europe and North America. In earlier times, and other parts of the world. family structures varied enormously from  this particular model.

Family history, like all other history, is constantly changing to fit new circumstances, so it should be no surprise that conceptions of family in the twenty first century are continuing to evolve, to fit a world that is no longer what it was in the nineteenth and twentieth centuries. Some of these changes are obvious, but like so much that is familiar, can easily be “hidden in plain sight.” A new study by sociologist  Brian Powell brings this into plain view. (His study is specifically of American views, but with the emergence of a shared world culture, many of his findings will also have relevance across a much wider geographic region.)

END_OF_DOCUMENT_TOKEN_TO_BE_REPLACED

The Fallacy of the Church Push Against Gay Adoption

August 11, 2010 — Terence
In Australia, the New South Wales parliament has a bill before it which would legalise gay adoption. The churches are outraged, and pushing hard against the measure, or asking for special treatment. One Australian church agency is asking for exemption  from the non-discrimination clause. Anglicare argues that adoption should not be about politics and the “rights” of gay couples, but about the best interests of the child.

In Mexico, the Supreme Court this week will follow last’s week’s decision on gay marriage in Mexico City with a consideration of gay adoption (and also gay marriage nationally). In the US, GOP candidates for the governorships of Nevada and Georgia are proposing to follow Florida and outlaw gay adoption. In the UK, where the issue is supposedly settled in law, the church is continuing to fight a rearguard action to have its own agencies exempted. What do all these have in common? END_OF_DOCUMENT_TOKEN_TO_BE_REPLACED

The path to marriage equality in Argentina resumes this week, with the Senate due to vote Wednesday on the bill that will introduce both gay marriage and gay adoption. An early clue to which they will go, will come on Tuesday when a subcommittee reveals its recommendation. I would have though that it was now a little late to still be trying to influence the decision (senators have now completed a tour of the country to take soundings of the views in rural areas and secondary cities), but the Mormons churches are determined to continue fighting against marriage to the end. END_OF_DOCUMENT_TOKEN_TO_BE_REPLACED

In the US, the struggle over adoption by lesbian or gay families concerns those states which prohibit it, either by state law, or (in Florida) by a complete constitutional ban. In the UK, where discrimination against gay or lesbian prospective parents is prohibited by law, the battle is entirely different. Here, the Catholic Church is seeking an exemption from the terms of the law for one of its agencies.

My friend Celia Gardiner, who as a lawyer and as chair of the Roman Catholic Caucus of the Lesbian and Gay Christian Movement, is heavily involved in correspondence with the Charities Commission on the Church’s application. I fear I have become totally lost in trying to follow the legal niceties – so don’t ask. However, I have undertaken to assist with passing on links to empirical evidence to contradict the claims on which the bishops base their case, so that I can happily share with you.

I have previously pointed out that in claiming that “Catholics” or “the Catholic Church” oppose gay marriage, the bishops (American or British) are being somewhat economical with the truth. It may be what the bishops oppose, it may be what they want the rest of us to oppose – but we do not simply mould our beliefs to episcopal diktat. Contrary to the Vatican line, most American Catholics do not believe that same sex relationships are morally unacceptable, and overall, are in favour or recognizing same sex marriage (that’s full civil marriage, not just civil unions).

I have now tracked down similar information specifically on adoption, and guess what? the bishops may oppose it, but Catholics as a whole are in favour. Now note, please, that the data are two years old, from 2008 (prior to the US election). All the evidence is that attitudes have moved on since then. For the case of the UK, which prompted my investigation, public attitudes are generally more supportive. Any claim by the bishops that “the Catholic Church” opposes same sex adoption is almost certainly not factually correct. ?

This will not surprise many  of my readers, or others in the reality-based community (borrowing Pam Spaulding’s phrase), but lesbians make better parents.  The evidence from research has shown this for years, and is now accepted wisdom among professionals in the field.  Here in the UK, the authoritative social attitudes survey has found that a third of British adults now agree that same sex couples  make “at least” as good parents as other couples – to say noting of the comparison with single parents, or with no parents at all.

This all makes intuitive sense: lesbian couples by the very nature of things are most unlikely to have unplanned pregnancies and unwanted children.  Lesbian parenting is generally a carefully thought through, deliberate decision.  The parents themselves will have had to negotiate the difficult process of coming out, which is often a psychological growth experience, and will have had to deal with prejudice, possible discrimination and sometimes outright hostility in their own lives – and have learnt to deal with it. It is to be expected, as research confirms, that

“children brought up by female couples are more aspirational and more confident in championing social justice. They show no more tendencies towards homosexuality than the offspring of heterosexual parents.”

All of this by now should be old hat, hardly worth a second glance. So why do I repeat and promote the story below, from Times Online?

Because too many of the power elite in the Catholic Church and their unthinking claque of supporters, have yet to join the reality based community.  They consistently ignore their own teaching that theology must pay attention to the findings of science and scholarship, and instead condemn even their own experts who state what is widely accepted by professionals, and would rather blackmail civic authorities than countenance the possibility of placing an adoptive child with same sex parents, no matter how sparkling their personal qualities or potential as parents. 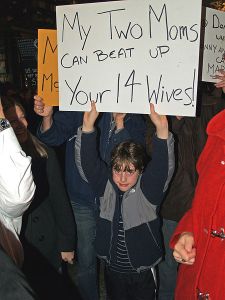 As long as the bishops insist on placing church ideology (it does not even qualify as sound theology) over the welfare of children, we must continue to publicise the findings of research and experts, aiming to build the sound theology, based on science together with faith and reason, that the establishment is singularly failing to do. END_OF_DOCUMENT_TOKEN_TO_BE_REPLACED

Following on writing recently “In Praise of Family”, I’d like to draw to your attention a profile piece in today’s Observer. Here in the UK, we are fortunate that the law prohibits discrimination against same sex couples or individuals in the adoption process, so all are equally free to apply.

More and more children are being adopted by same-sex couples. In the past two years the number of gay men approved to adopt has doubled. Here we listen to some of their stories.

And that is that – just the stories, as told by the new parents ( and one couple still going through the approval and matching process.) The article makes no attempt to analyse or comment on the stories, but a few things stand out for me.   END_OF_DOCUMENT_TOKEN_TO_BE_REPLACED