In the Catholic Church, many people will know that in spite of official disapproval from on high, and outright hostility by some individuals in the church, very often parishes on the ground can be truly welcoming and accepting, with acceptance and full inclusion from both parishioners and parish priests. That was certainly my experience at Holy Trinity Parish, Braamfontein, Johannesburg -and is the experience of many others at countless parishes around the world.

A story from Chicago Sun Times demonstrates that this disconnect between official disapproval and practical warmth on the ground also applies in other formally homophobic institutions, in this instance the US marines. In spite of the policy of DADT which was still in force last June, and notwithstanding the vicious persecution that some gay servicemen experienced under that policy, the widowed husband of one Marine, John Fliszar,  found exceptional co-operation from the Naval Academy officials when he approached them for help in executing the dead man’s wish to have his ashes  interred in the Naval Academy.

I enjoyed imagining the confused expressions of these officials when they were first approached by the widowed husband, Mark Ketterson:

The memorial coordinator asked about his relationship to the deceased. Ketterson said that John Fliszar was his husband.

“They were always polite, but there was this moment of hesitation,” Ketterson recalled. “They said they’re going to need something in writing from a blood relative. They asked, ‘Are you listed on the death certificate?’ ‘Do you have a marriage license?’ ”

END_OF_DOCUMENT_TOKEN_TO_BE_REPLACED

In the growing ranks of out and open gay or lesbian clergy, Peter Gomes was an anomaly: he was raised Catholic, but became a Baptist pastor. He was also African American, and a Republican. Not, in short, an obvious fit with the popular image of an American gay man. But (and this is important) he was able to recognize and publicly acknowledge his sexuality, and to reconcile it with his faith. This is an important reminder for us that there is no conflict at all between a gay or lesbian orientation and religious faith, or with conservative political philosophy. The only conflict is with those influential people in some churches and in some political circles who seek to impose their own interpretations of Scripture, or their own political prejudices, on everybody else – in disregard of the fundamental Gospel message of inclusion and justice, and the conservative principle of non-interference in private lives.

I have no personal knowledge of the life or work of Rev Gomes, other than the inspiring title of his book, “The Scandalous Gospel of Jesus: What’s So Good About the Good News?

“. (The Gospel message is indeed scandalous, and should be read much more carefully by those who in their ignorance use it to promote their modern conceptions of so-called “traditional” family values, or untramelled capitalism).

Instead of extensive researching and writing a full assessment of Rev Gomes myself, I simply draw your attention to reports elsewhere.

END_OF_DOCUMENT_TOKEN_TO_BE_REPLACED

“Come Out”, Do Not Be Ashamed, Filipino Archbishops Tell Gay Catholics

The website of the Filipino television station GMA News has an intriguing report that two Archbishops, Paciano Aniceto pf San Fernando and Lingayen-Dagupan Archbishop Emeritus Oscar Cruz have urged to “come out in the open”, because they have nothing to be ashamed of.

Their full message does not depart from the formal position of Vatican doctrine, as it repeats the standard distinction between “homosexual persons” and  “homosexual acts”, and repeats the warning that these “acts” because they are “contrary to natural law”, and do not flow from “natural complementarity”. In this respect, they are as offensive as many other utterances from our bishops and the Vatican. (The occasion for this remarks was the Philippines launch of the book ”  ” by Fr John Harvey, the founder of Courage).   Nevertheless, I see some good news in this report, supporting my belief that there is a gradual and welcome shift of emphasis underway. There are two elements of this shift evident in the bishops’ message.

END_OF_DOCUMENT_TOKEN_TO_BE_REPLACED

Young people need role models. Young boys in particular look to their sporting heroes, far too few of them have had the courage to come out publicly as gay. There are welcome exceptions – and England cricketer Steven Davies has just added to the number, becoming the second British member of a national squad in a major team sport to do so. (The first was Welsh rugby captain, Gareth Thomas).

Steven Davies, the 24-year-old Surrey and England wicketkeeper, has become the latest high-profile sportsman to announce he is gay. In today’s Daily Telegraph Davies becomes the first serving professional cricketer to ‘out’ himself.

Davies, who began his career at Worcestershire, says he hopes his decision will encourage other young gay people to do the same. He said: ‘This is the right time for me. I feel it is the right time to be out in the open about my sexuality. If more people do it, the more acceptable it will become.’

The New Statesman makes a bold claim, that Davies’ coming out could be the tipping point for public acceptance and openness in sports, based on the contrast between Davies and Gareth Thomas, who did so at the peak of his career, and with a solid backing of public support . Davies is young, just starting out in his career, and has not yet established that personal following, which made his action all the more courageous. This assertion of a tipping point may be premature – but there will certainly be many more, in Britain and elsewhere, in team sports of all kinds as well as in the individual sporting codes (where there are rather more examples already).

Coming out is a process, not an event. Davies first did so to his family, five years ago, and then to his cricketing colleagues after his selection for the national team last year. He has now gone public. The very many other gay men in professional sport, who remain trapped in a closet of fear should pay attention to his words: coming out can help others – but also themselves. Coming out is a relief.

“I’m comfortable with who I am – and happy to say who I am in public,” he said in an interview with The Sun.

“To speak out is a massive relief for me, but if I can just help one person to deal with their sexuality then that’s all I care about.”

Davies, who missed out on a place in the England squad for the current World Cup campaign, came out to his friends and family five years ago.

But the first time he told any of his fellow players came following his selection for England’s successful Ashes tour during the recent winter.

And he revealed the relief he felt after telling captain Andrew Strauss and the rest of the team.

“It was a fantastic thing to do, telling the lads. The difference is huge. I am so much happier,” he said.

The Transformation of Christian Response to Homoerotic Love

You’d never guess it if your only knowledge of the churches and homosexuality came from Focus on the Family, NOM or California Catholic Daily in the US, or from Christian Voice or the rule-book Catholic blogs in the UK, or from breakaway groups in the Anglican communion worldwide, but we are in the midst of a dramatic, wholesale transformation of the Christian churches’ response to homoerotic relationships. This is clearly leading in the direction of full inclusion in church for queer Christians, and for evaluating couple relationships and their recognition in church on a basis of full equality. This is bound to lead in time to profound improvements in the  political battles for full equality, and in the mental health of the LGBT Christian community.

These are bold statements. Am I mistaken? Am I deluding myself? It is of course possible that this is a case of wishful thinking, that I am misreading or exaggerating the evidence.  It’s possible – but I don’t think so. The evidence is compelling, if not yet widely noted. To substantiate my argument, I want to present the facts, and their implications, in some detail. As there is too much for a single post, I begin today with just a summary, as heads of argument. I will expand on the main sections in later posts, which I have in preparation.

(For now, I have made no attempt to supply detailed substantiation or links – these will follow, as I expand later on each specific theme).

END_OF_DOCUMENT_TOKEN_TO_BE_REPLACED

Father Matthew Kelty, OCSO, was a monk at the Abbey of Gethsemani in Kentucky, where he was the last confessor to Thomas Merton. He also came out as gay at the age of 90.

The full obituary is worth reading at Religion Dispatches – I want to reflect only on the coming out story, and Fr Matthew’s assertion that gay is a gift – especially in the pursuit of monastic celibacy. 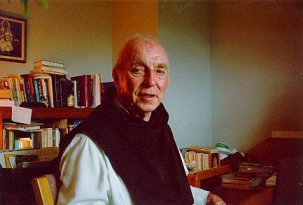 END_OF_DOCUMENT_TOKEN_TO_BE_REPLACED

Popular speech accepts that “Catholics” oppose homosexuality because that is the publicly expressed view from the Vatican, but completely overlooks evidence from research that most real – life Catholics in fact do not see homosexuality as a moral issue and even support legal recognition for same sex marriage;   ignores the historical evidence that queer relationships have always been a  fact of church life at all levels of the church; and the plainly observable fact that the outwardly homophobic face of the church is belied by an intensely homoerotic culture. In the same way,  the popular perception that Muslims are implacably opposed to homosexuality is also a gross oversimplification, which is contradicted by the facts.

Classical Arab literature is replete with examples of works which celebrate the delights of wine and beautiful boys. In the years when homosexual activity was subject to strong legal sanction in Western countries, wealthy gay men regularly took holidays or even permanent settlement in some Arab cities, where such pleasures could be pursued without legal penalties – and the supply of pliable and available young men abundant. In spite of the public face of Islamic hostility today, private toleration and practice of same sex relationships continues, even today.

A recent BBC report on the story of one lesbian couple who celebrated their marriage in a traditional Muslim form  illustrates this  – and also reminds us that marriage exists and is real, even where there is no legal recognition of it. Here are some extracts from that report: END_OF_DOCUMENT_TOKEN_TO_BE_REPLACED