How is it then, that the Christian Church, and  Catholicism, in particular, have become so firmly linked in the public mind with the idea of sex as sin? For Catholics, all sex outside marriage is officially taboo.  Even inside marriage, sex is viewed with suspicion unless it is open to the possibility of procreation.  It is only recently that grudging recognition was given to the unitive value of sex – even inside marriage.  Yet it is clear to all that few Catholics pay any more than lip service to the official catechism on sin.  Whether as jerking – off schoolboys (or girls, or adults), as horny teenagers, engaged couples, cheating spouses, as faithful loving couples choosing to limit their families, as lonely divorcees, as gay men and lesbians, or as priests and other religious ignoring their vows of celibacy, the overwhelming majority of us are, in one form or another sexual transgressors in the eyes of the Church.

Is it any wonder that in the public mind, the equation “sex=sin” goes hand in hand with another:   “Catholicism = Guilt”? 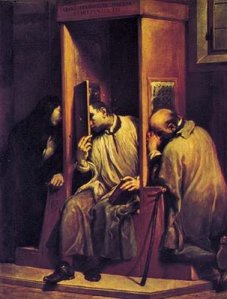 But I do not want to dig deeper into the unpleasantness today.  (There is time for that later.  I will return to it soon, as part of my continuing series on clerical abuse.)

Other faiths do not make the same connection between sex and sin.  Judaism, for all that it has extensive purity laws and complex moral and legal codes, unequivocally supports and praises the unitive value of  sex, at least within marriage.  Part of the obligation of the spouses is said to include offering each other sexual satisfaction.   Muslims take a similar view:  part of the supposed motivation for suicide bombers in our day is the prospect of a martyr’s reward in heaven:  1000 virgins to satisfy their male needs.   Hindus celebrate sex as part of spiritual practice, with the promotion of tantric sex, the Kama Sutra, and famed erotic images on temple walls.  Many pagan religions employed temple prostitutes (of either gender) to heighten the spiritual experience of worshippers.

It is useful, then to recognise the increasing signs that more and more people are recognising that sexual expression is not only not necessarily sinful, but can be a positive expression of the sacred, and has a close association with spirituality. With great synchronicity, this message was brought home to me from four different sources over the past week.

At the Wild Reed, Michael Bayley has a great piece on this theme.

Shocked? Well, get over it. 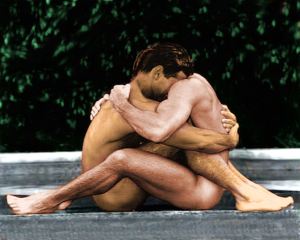 “Of course as a gay man, (Michael writes) the thing that appeals to me most about John’s poem is that it depicts his lover as another man:

Upon my flowery breast,
Kept wholly for himself alone,
There he stayed sleeping,
and I caressed him,
And the fanning of the cedars made a breeze.

The breeze blew from the turret
As I parted his locks;
With his gentle hand
He caressed my neck
And caused all my senses to be suspended.

I remained, lost in oblivion;
My face I reclined on the Beloved.
All ceased and I abandoned myself,
Leaving my cares
forgotten among the lilies.”

Go ahead, cross to The Wild Reed and read the full poem, with Michael’s commentary.

At Nihil Obstat, Censor Librorum has posted without comment two versions of the ad campaign for “Catholics Support Condoms”.  Leaving aside (for now) the issue of the condoms, what caught my attention was the first two lines in the copy:

“We believe in God.
We believe that sex is sacred.”

While doing some bibliographical research yesterday for my expanding book pages, I was struck by the number of worthwhile books I came across on the topic, from Catholic perspectives and other traditions, from gay, lesbian, transgfendered and other perspectives .  Thes will soon be added to the Book Club (a small selection are highlighted alongside this post). 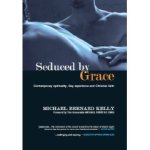 Seduced by Grace: Michael B Kelly

He too pointed to the rich vein of the erotic in traditional mystical writing, referring also to St Theresa and St John of the Cross in particular , using as illustration the same poem as that posted on the Wild Reed.   He also discussed the obvious fact that far too much of the Church’s writing and teaching on sex has been done by “celibate men in frocks”, who self-evidently either had no practical experience, or were unable to disclose any that they had. To counter this, it is important that we as laity need to speak much more frankly about sex. There was much more, but I will not go into the rest in this post:  he deserves a full analysis later, which I am working on. I do, though, want to point out his central point: while it is clear to many that erotic experience (including gay men’s experience) is valuable in spirituality, this has received limited recognition or scholarly attention.  He is currently engaged in doctoral research, using personal stories as raw material.  He urges us all to speak out openly and frankly of our own experiences, to bring the truth to wider attention.  This is a sentiment I heartily endorse.  I have promised to send to Michael my own stories, and urge my readers to do the same.  (If you want to take me up on this offer, just post a brief comment, and I will send you an email address, if you do not have an alternate access)

In the same spirit of openness, I have posted on my personal page on this site, a deeply personal story of my own homoerotic retreat experience. (Health warning:  if you are squeamish or sceptical of claims about ‘mystical’ experiences, by all means stay away.  I would once have reacted in the same way.  But if you are more open – minded, take a look and make up your own mind.  I simply tell it as it happened.)  Read the story at  “6 days that changed my life” .

Glaser, Chris: Coming Out to God: Prayers for Lesbians and Gay Men, Their Families and Friends

Glaser, Chris: Coming out As Sacrament