Vatican: A Ship Sinking Itself?

One of the funniest books I have ever read was “The Book of Heroic Failures”, written by the founder of the Not Terribly Good Club of Great Britain. The background to this is that Stephen Pile was a fairly ordinary Englishman who believed that the world was becoming obsessed with “success” – bigger, better richer, brighter, faster, and all the rest – when most of us are pretty ordinary, like himself. So, reasonably enough, he formed a club for people who were NOT very good at anything, and especially for those who were very bad at something – who used to meet, and tell each other stories of spectacular failures.  These were later collected and published under the title “The Book of Heroic Failures.” I read this nearly thirty years ago, and still snort when I remember some of the anecdotes:  of a hard of hearing military quartermaster who incorrectly heard a request for several hundred brass taps, and bought bra straps instead (for an all0male camp), or the nervous amateur actor who had a few drinks to calm his nerves before his first night as the Prince of Denmark, then a few more – then passed out just before the curtain.  In the best theatrical tradition, the show duly went on – without Hamlet. 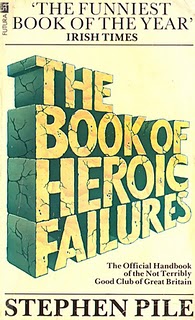 The book itself was a story of staggering failures:

END_OF_DOCUMENT_TOKEN_TO_BE_REPLACED

I’ve been reading Martin Duberman’s anthology, “Hidden From History“, and in particular James Saslow on Homosexuality in the Renaissance. One of Saslow’s key points is that at this time, men who had sex with men were not exclusive – in modern terms, they would more likely be described as “bisexual”. In a passage about how the rich and powerful freely made sexual use of their subordinates, I came across this throwaway reference:

Similar patterns prevailed among the clergy and educated humanists. Charges against Paul II and Julius II centred around their seduction of much younger men; Cellini’s autobiography records a beautiful and talented youth, Luigi Pulci, who made a career out of service to Roman bishops.

Now, I knew about Julius II – and for that matter, Julius III – but this was the first sexual gossip I have come across concerning Paul II, so I explored further. This is what I found: it seems he died while being sodomized by a page boy.

Paul II died, on July 26, 1471 of a stroke, allegedly whilst being sodomized by a page boy. END_OF_DOCUMENT_TOKEN_TO_BE_REPLACED

Question: Look carefully at this picture of assembled Catholic cardinals, and decide (carefully, now): Which of these, in terms of Pope Benedict’s own reasoning, are “excluded from God’s People”?

Answer: If you are to follow the line of reasoning of Pope Benedict himself, in his earlier incarnation as head of the Congregation for the Doctrine of the Faith, the answer should be plain to see: all of them.

END_OF_DOCUMENT_TOKEN_TO_BE_REPLACED

The Bishops of Rome *

Depressing church news over the past two months has led me to pick up and start reading a book which has been on my shelves some time, but which I have previously only dipped into.  The removal of  excommunication of SPXX  members has received wide and ongoing publicity; clerical sexual abuse is again in the news with the FBI reopening old investigations in LA Diocese, and fresh revelations over   Fr Marcial Maarciel Delgado of the Legionnaires of Christ.  Meanwhile, on the progressive wing of the church, there has been less coverage in the MSM of the silencing or excommunication of the priests  Fr Roger Haight,  Geoffrey Farrow and Roy  Bourgeois, or of bizarre goings-on in the parishes of St Mary’s, Brisbane and St Stephen’s, Minneapolis, where attempts to muzzle complete parishes have led to resistance (St Mary’s) or exodus (St Stephen’s).

What all these have in common is that they are concerned with power in the church – its extension, its abuse, or attempts to defy or resist it.  so I picked up again  “Confronting Power & Sex in the Catholic Church”, by Bishop Geoffrey Robinson.  I am pleased that I did.  Published in 2007, this book END_OF_DOCUMENT_TOKEN_TO_BE_REPLACED

The CDF famous (or infamous) letter “On the Pastoral Care of Homosexual Persons”  makes the claim “Thus, the Church’s teaching today is in organic continuity with the Scriptural perspective and with her own constant Tradition” , and later states “Scripture bids us speak the truth in love”.  This is the image that the established church so likes to proote – of an authoritative, unchanging tradition “speaking the truth” for all time.  The image favoured by the church, howeer, is a false one.

In the context of current arguments about the papacy and its authority, it is worth recalling END_OF_DOCUMENT_TOKEN_TO_BE_REPLACED