The Hawaii state Senate yesterday approved civil unions legislation for the state. Approval by the state House, which last year passed similar legislation before it was vetoed by GOP Governor Lingle, is surely just a a formality. The new governor, Democrat Neil Abercrombie, has already promised to sign the legislation when (no longer if) it reaches his desk. Near-marriage, marriage in all but name, is on the way in Hawaii.

I particularly likes this statement from Senator  Solomon of Honokaa. In his formulation, this expression of Aloha sounds to me remarkably like a statement of the true spirit of Christianity:

In my mind, only three questions remain: 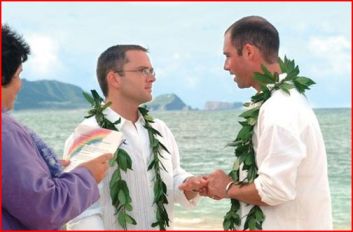 The state Senate voted 19-6 for the bill, which now goes to the state House of Representatives, where a nearly identical measure passed last year before it was vetoed by then-Gov. Linda Lingle, a Republican.