When news of Cardinal Mahoney’s retirement as Cardinal Archbishop of Los Angeles hit the news recently, numerous commentaries on his tenure and achievements began to appear. I read several of these, looking for observations on one particular aspect of his period in office – but in vain. What I was looking for was information on the diocesan ministry to lesbian and gay Catholics, about which I have twice watched a recording of the television programme,  “A Journey for Understanding”, produced by Rick Flynn. The model that LA has adopted is rather different from that of the Soho Mass that I am familiar, but one that I thought, when I saw the TV programme, had strong potential. That programme, however, was made back in 1992, a long time ago, and only a few years after the ministry itself was founded. I have been wondering how the ministry has developed since then.

I have no need to wonder any longer. By courtesy of my friend and colleague Martin Pendergast, I have been sent by email just such an assessment that I was not able to find for myself. (The full assessment is online at The Tidings). From this, together with the ministry’s page at the diocesan website, from its own impressive website and from its active participation in the Religious Education Conference coming up, it is obvious that the program is very much alive and flourishing. 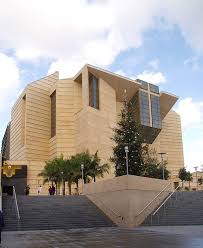 Cathedral of Our Lady of the Angels , Los Angeles