Gay Marriage: Coming (Soon?) to a Church Near You.

It is now widely recognized that the move to marriage equality is irreversible. From polling evidence, the trend is clear. Politically, candidates for office are increasingly recognizing the dangers of homophobic rhetoric, and some are starting to see the value of declaring openly for equality. Courts are ruling that discrimination, in marriage law, in military service, and in adoption law, is plainly unconstitutional. As some US states and countries of Europe, Latin America and elsewhere move towards recognizing queer families, the greater visibility that follows erodes resistance easing the path to equality for those that follow.

All this is well known – for civil marriage. What is less widely recognized is the extent of change that has also been taking place in the churches. Inevitably, this will lead in time to acceptance also for same-sex church weddings. From the position just a few years ago where almost all major denominations were strongly against homosexual relationships, and public condemnations passed without comment, this claim may seem hard to swallow, so let us review the evidence.

END_OF_DOCUMENT_TOKEN_TO_BE_REPLACED

Out in Church: Summer Progress Expected

Change is coming, of that there can be no doubt. (Sadly, in spite of the suggestion by Cardinal Schonborn, I am not here referring to the Catholic Church, but to others. Just how long Rome can lag behind, is another matter.)

First, consider the progress up to now. The Unitarian Universalist Association and the United Church of Christ accepted full inclusion some time ago, and have many openly gay, lesbian and trans pastors.  Last year, in a blaze of publicity, the ELCA voted to approve the recognition of lesbian or gay partners in committed and faithful permanent relationships, without the expectation of celibacy, on exactly the same basis as heterosexual marriages. That decision was accompanied by many dire warnings of doom, and predictions that many congregations would secede in protest. There have been some withdrawals, but as far as I can tell, not too many. Meanwhile, life in the ELCA has continued as normal, and the decision came into practical effect earlier this year. 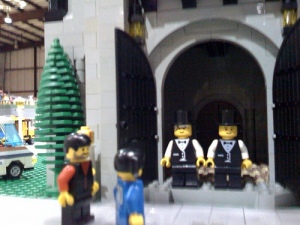 In the Episcopalian/ Anglican communion, things are more complex, with international ties and allegiances also coming into play. The US Episcopalians have now consecrated two openly gay or lesbian bishops, and have nominated but not approved a few others. In the UK, that decision has been highly controversial, but is closely tied up with controversy over women bishops, which (unlike the US) have hitherto not been permitted. British Quakers resolved last year bless same sex couples in church, and were influential in the recent change in the law to permit civil partnerships in religious premises. Meanwhile, the Swedish Lutheran church has also ordained a lesbian bishop, and has agreed to apply the new law on same sex marriage in church as well. The Danish and Icelandic Lutherans are considering following their Swedish counterparts in applying their own countries’ laws on gay marriage when they are approved by parliament.

In the US and Europe, therefore, progress to full inclusion in church is substantial, at least in American mainline Protestant denominations and their European counterparts. Where can we expect the next victories? With the summer assembly season approaching, these are the major things we should be looking for. END_OF_DOCUMENT_TOKEN_TO_BE_REPLACED