Lest We Forget: The Ashes of our Martyrs

For Ash Wednesday, I reminded readers here that the season of Lent is also a “joyful” season, an aspect that should not be ignored.  We should never forget though, that it is also a solemn time, above all a time for repentance and renewal, individually and collectively.

So it was entirely appropriate and welcome ten years ago, that at the start of the season Pope John Paul spoke of the horrors that had been perpetrated by the church in the past, apologised for the evils it had done to .    and asked for forgiveness. This was important and welcome:  I do not wish to belittle it in any way.  However, there is an important category of offence which was omitted from the list, for which he did not apologise, and for which there has never been any apology: the persecution of “sodomites”.

For the first thousand years of its history, the Church was disapproving of homoerotic relationships, as it was of all sexual expression, but showed varying degrees of tolerance, culminating in what John Boswell described as a flowering of a gay sub-culture in the high medieval period.  During the 11th century,  Burchard, the Bishop of Worms in Germany,

“classified homosexuality as a variety of fornication less serious than heterosexual adultery. He assigned penance for homosexual acts only to married men. In civil legislation regulating family life in the diocese of Worms there is no mention of homosexual behaviour”

In 1059, the Lateran synod accepted all of the reforms for the church proposed by St Peter Damian – except for his proposal for harsher penalties against monks engaged in homosexual affairs.

All that changed within a few decades. In 1120, the Church Council of Nablus specified burning at the stake for homosexual acts.  Although this  penalty may not immediately have been applied, other harsh condemnations followed rapidly. In 1212, the death penalty for sodomy was specified in in France. Before long the execution of supposed “sodomites”, often by burning at the stake, but also by other harsh means, had become regular practice in many areas. 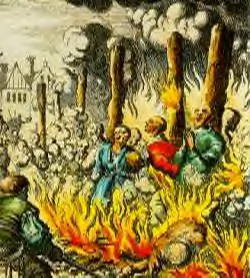 Historical research to date has been patchy, and in many places the records have not survived. Even so, the evidence from the modest research we do have is horrifying.  In the largest scale, and best known, single incident, over 400 hundred Knights Templar were burned in the early 14th century. This is usually discussed in terms of trials for “heresy”, but in fact the charges were of both heresy and sodomy.  (These terms were often associated and confused at the time, but much of the evidence in the Templar trials made it clear that specifically sexual offences were meant).

To modern researchers, it is clear that the trials were deeply flawed, with the procedures seriously stacked against the accused.  In marking the 700th anniversary of the trials in 2007, the Vatican explicitly cleared those killed of the charges of heresy – but said never a word about the charges of sodomy.

Elsewhere, the trials and punishments were of individuals, or of small groups – but with equally flawed judicial procedures. (Typically, the prosecutor was also judge; torture was widely used to extract confessions;  and church and state benefited by sharing the property of those convicted).  These were sometimes under the auspices of the Inquisition, sometimes of the state – but always inspired by church preaching against the “sodomites”.

The severity of the pursuit and punishments varied from place to place.  Venice was one of the harshest, with several hundred executions from 1422, until the persecution finally ended. In Spain, it was calculated that in total there were more burnings for homosexuality than for heresy. Executions also applied in the New World – in both North America (where some of the colonists were accused and convicted) and South (where it was the indigenous locals who suffered for the Spanish prejudices) .  Altogether, it is likely that executions in Southern Europe, either by or with the collaboration of the Church, amounted to several thousand men.

After the Reformation, the practice of burning homosexuals spread to Northern Europe and some of the new Protestant territories, where the practice was sometimes use as a pretext to attack Catholic clergy: in Belgium, several Franciscans were burnt for sodomy, as was a Jesuit in Antwerp (in 1601).

The persecution finally began to ease from the late 17th century, when some “softening” became evident by the Inquisition in Spain. Nevertheless, some executions continued throughout the eighteenth century, to as late as 1816 in  England. The statutory provision for the death penalty was not removed in England until 1861.

Obviously, the Catholic Church cannot be held directly responsible for the judicial sentences handed down by secular authorities in Protestant countries.  It can, however, be held responsible for it part in fanning the flames of bigotry and hatred in the early part of the persecution, using the cloak of religion to provide cover for what was in reality based not on Scripture or the teaching of the early Church, but on simple intolerance and greed.